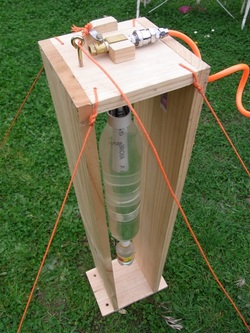 Pressure testing allows you to check if there are any leaks before anymore modifications are made.

A 1 metre high tower designed to make pressure testing rockets easy and safe.
The pressure vessle is pointed down so any chance of the pressure vessle flying is met with the ground, this also prevents water from flowing down to the pump. Four ropes are pegged into the ground to stop the tower falling over. Two 19mm walls for streangth and two open sides to veiw the pressure vessle incase of leaks.
On top, a simple system involving a T-peice which leads from a pump, down to a rocket and across to a pressure release valve.

The intention of the test stand is to measure flow rates and analyse the effects of different nozzles. Because the tests are static, the water is not held down like it would in flight so the water is free to splash up, allowing some air to escape before the water. 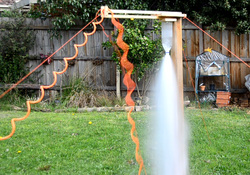 The rocket is raised off the ground to reduce the interference of the exhaust with the ground. A rope extends between the the arm to the left and the base which is attached to the launcher in the middle. The rope prevents the launcher from hitting the ground when released from the rocket.