Aircommands Recovery Guide is a good resource for choosing a Recovery System. 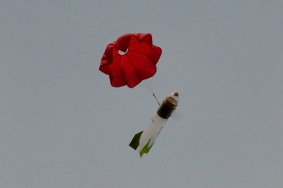 One of the most efficient way of slowing a rocket down is the Parachute. Very compact till introduced to the airstream where it opens to increase drag.
Umbrellas are a cheap and stong source of making parachutes. They are easy to sew to and are already in a hemisphere shape.
Parachutes made out of large plastic bags are light, compact but not very strong. To streangthen them, each string attached to the parachute should be sown through sticky tape to stop tearing. 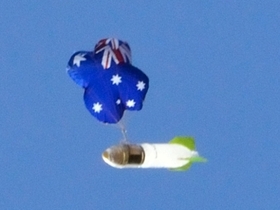 After pulling apart an Australian Flag, I sowed around the edge for streangth and to stop freying. Then I sewed 8 cotton strings to the edges then made sure the outer strings were further away then the inner strings to keep the parachute as rectangular as possible.
No hole was needed for a stable decent because the flag was small and porous, containing lots of small holes. It worked out quite well but was a bit difficult to see from 100 or so metres below it. 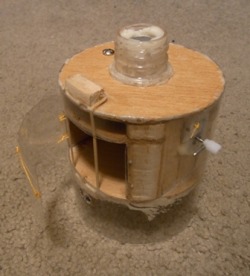 When the rocket accelerates, the increased G-force exerted on the weight forces the weight back, pulling out the locking pin. When the locking Pin is pulled out, it relieves tension from the string which was  jamming the timer. Now the timer is released it spins and unwinds till the string from the door slips off allowing the rubber bands to eject the parachute. 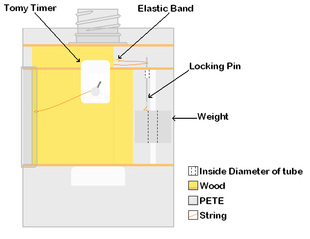 A strong wooden construction also moves the CG forward for a stable flight.