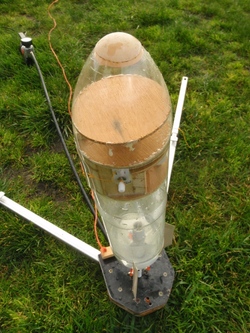 Nose Cones are used to make the front of a rocket more aerodynamic by easily moving air out of the way.
Weight
Because most Water Rockets have a great acceleration and are unaerodynamic, they tend to decelerate very quickly because there so light. Because Water Rockets have such a short thrust phase, they have a long yet slow coasting phase. To lengthen this coasting phase and in turn, fly higher, extra weight is needed.
The extra weight helps the rocket force its way through the air and has a greater resistance against slowing down. The downside of this is that the extra weight slows the rocket down during its thrust phase, so be sure not to add too much weight! 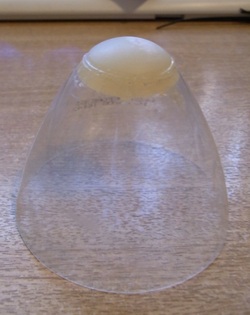 This method adds lots of weight to the front of a rocket for stability while giving an aerodynamic shape.
And its really strong, I tried to remove a badly glued tip with a hammer but resorted to using a saw as well to get it out.

The nose cone was made from paper mache.