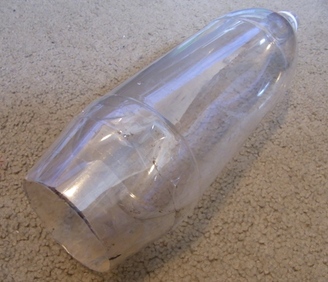 This rocket is designed to propel a Tennis Ball before dropping away leaving the ball to continue to a high altitude.
Capacity: 1.25L
Nozzle ID: 22mm
Recovery System: Tumble
Payload: Tennis ball 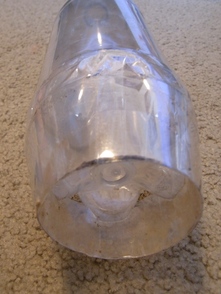 This rocket consists of a bottle with a cone designed to hold a Tennis Ball. The nose cone contains a cylinder designed to stop small and irregular shaped objects from getting stuck inside the nose cone during flight.
An all PET construction.
22mm nozzle for high momentum transfer into the Tennis Ball.
I used Cone Layout to accurately make the nose cone. 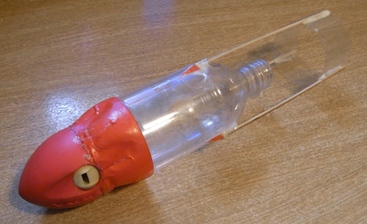 This is the ball I used to make the nose of my rocket from. The ball is padded so it is safe to catch and the yellow howlors whistle as the ball flies. 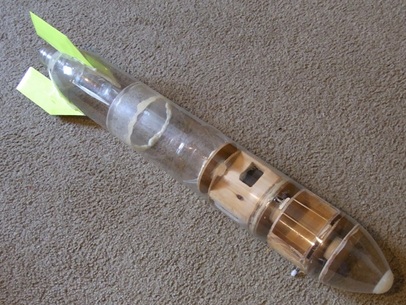 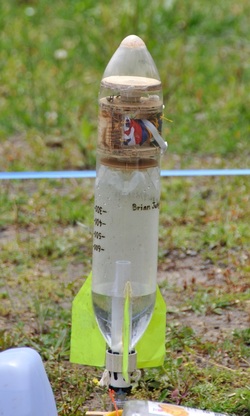 The Venturi-2b was designed to test a Timer Recovery System. Because of frequent failures with previous Recovery Systems, I wanted a more reliable system. It was designed with the ability to add an Experimental Module and recover the results safily. Though it was designed for experimentation, it later became my main Recovery system.
Because the system was fragile, it would often break and become unreliable. So a simplified version was made which was strengthened to the point where it was able survive a crash.
Capacity: 2L
Nozzle ID: 22mm
Recovery System: ADTRS 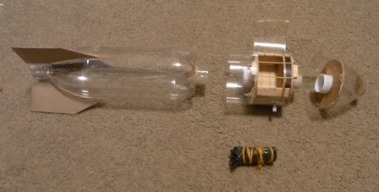 The Venturi-2's modular design enabled different Recovery Systems and Experimental Modules to be attached easily. It also made it easy to fix and replace a recovery module. 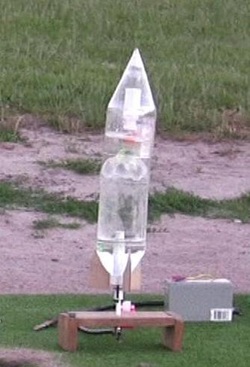 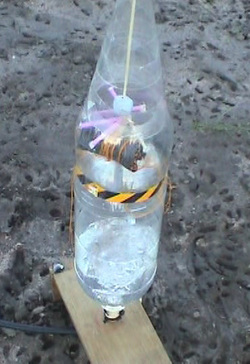 This rocket was testing a gravity switch which was meant to release the parachute once the rocket turned over and began its decent. The issue with the system was that the rocket was very light and would decelerate very quickly after take-off. This Negative G Stage of Flight would then trigger the switch, deploying the parachute too early.
This system is known to work for slower rockets as there deceleration is more subtle.
Capacity: 2.25L
Nozzle ID: 22mm
Recovery System: Gravity Deployed Recovery System